Yarr, the page you requested can’t be charted on any known map. 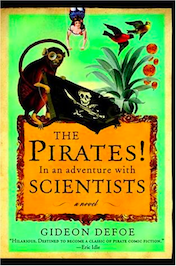 “It would be a lot quicker than that if we could just sail straight there, but I was looking at the nautical charts, and there’s a dirty great sea serpent right in the middle of the ocean!

FitzRoy frowned. “I think they just draw those on maps to add a bit of decoration. It doesn’t actually mean there’s a sea serpent there.”

The galley went rather quiet. A few of the pirate crew stared intently out of the portholes, embarrassed at their Captain’s mistake. But to everyone’s relief, instead of running somebody through, the Pirate Captain just narrowed his eyes thoughtfully.

“That explains a lot,” he said. “I suppose it’s also why we’ve never glimpsed that giant compass in the corner of the Atlantic. I have to say, I’m a little disappointed.”

— Gideon Defoe, The Pirates! In an Adventure with Scientists

Back to the Goodreads homepage